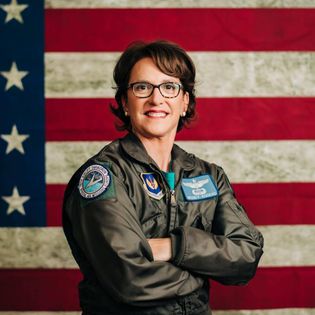 Daughter of a long line of Army officers, in 1976 Lt. Col. Wendy Rogers was commissioned as a 5th-generation military officer into the Air Force from Michigan State University with her bachelor’s degree and then master’s degree from the University of Alabama in Clinical Social Work. She began her career treating patients in the Air Force mental health clinic.

In 1981, Wendy Rogers became one of the first 100 women pilots in today’s Air Force by earning her wings at Williams AFB in Arizona. Following Air Force jet training, Wendy piloted worldwide airlift and humanitarian missions in the C-141 transport jet for several years. Wendy then served as a flight instructor for cadets at the US Air Force Academy.

The latter half of Wendy’s 20-year Air Force career placed her overseas. While in Europe, Wendy piloted Air Force C-21 Learjets and led three different operational divisions at Headquarters US Air Forces Europe. During the fall of the Berlin Wall and efforts to improve relations with former East Bloc countries, Wendy was deployed for six months downrange to run the Bosnian Airlift. She finished her career with over 3,000 hours of jet time and numerous commendations, including the Defense Meritorious Service Medal.

After retiring from the Air Force in 1996 after twenty years of active duty, Wendy and her husband Hal (also a retired Air Force officer) started their own home inspection business. Their crew of Arizona-licensed home inspectors has worked throughout Coconino, Yavapai, Pinal and Maricopa counties. Hal is an electrical engineer who originally grew up on a Holstein dairy farm milking cows twice daily till age 18.

Wendy Rogers is uniquely able to serve the needs of Legislative District 7 because she is able to pilot her own aircraft into many of the short-field runways in remote rural areas.

In addition to her degrees in social work, Wendy holds a second master’s degree in National Security Studies from Cal State San Bernardino. Wendy and Hal homeschooled their children George and Emily during their elementary years. George and Emily then graduated from an Arizona public charter high school and were merit-scholarship ASU Barrett Honors College Sun Devils. George was commissioned as an officer in the US Marine Corps in May 2009, later returning to Arizona to earn his PhD in electrical engineering at ASU in 2014. Emily graduated in 2012 with a Barrett Honors BA in German and Honors BS in international business and marketing. George and his wife are the proud parents of four children who are homeschooled. Daughter Emily and her husband live in Denver with their two baby sons adding the title of “proud grandparent of six” to Wendy’s life of accomplishment.

Wendy has been active in the local community as development director of an Arizona charter school, as a foster parent, and as an Arizona substitute teacher. Both Wendy and Hal are active, alert-roster-ready officers in the US Air Force auxiliary, the Civil Air Patrol (CAP), flying missions and participating in search and rescue efforts. Wendy Rogers’ maxim in life remains what her parents taught her from Luke 12:48: “For unto whomsoever much is given, of him shall much be required; and to whom men have committed much, of him they will ask the more.”

President Trump endorsed me for 2022 because I am fighting to protect our God-given rights, our borders, and the state of Arizona from socialists and liberals. My platform is to 1) Protect life 2) Protect our guns 3) Ban sanctuary cities 4) Protect our border 5) Take care of our veterans. I can’t fight this fight alone and need your help. Will you stand with me to reelect me to the AZ State Senate to be an unabashed pro-America conservative? As a retired career Air Force pilot, I know what it’s like to fight. I don’t owe lobbyists or special interests ANYTHING. I will only work for you. I’m Wendy Rogers, and I ask for your vote.