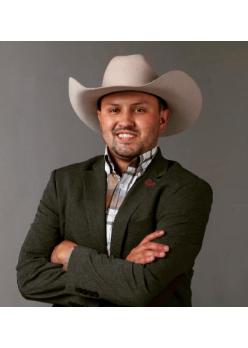 Austin Smith is a proud 5th-Generation Arizonan. Growing up in LD-29, he became a National FFA Award recipient and an All-State award-winning football player at Millennium High School. Working in the agricultural industry on ranches and farms across Arizona, he saw firsthand how devastating an out-of-control government can be to water, business, and freedom. This led him to become involved with grassroots activism as early as the 2014 Midterms. Beginning in 2016, Austin joined a young team of Conservative Activists led by Charlie Kirk and helped convince Charlie to move Turning Point USA’s headquarters from Chicago to Phoenix. Turning Point would go on to create over 200 Arizona jobs thanks in large part to Austin’s insistence that the heart of the Youth Movement for Freedom & Free Markets be based in America’s next great Battleground State. After four years working directly under Charlie Kirk—one of America’s foremost conservative fighters—Austin helped him to run Students For Trump, a 501(c)4 project of Turning Point Action. In his capacity there as National Field Director, Austin organized a state-of-the-art effort, creating college chapters on over 300 campuses, amassing over 750,000 doors knocked—effectively reaching millions of voters with President Trump’s America First message. Following the 2020 election, while actively engaged in the grassroots effort to Audit the Vote in Maricopa County, Austin completed a robust offensive to recruit 1,000 Precinct Committeemen in Arizona, fighting every day to take back our state from the grips of tyrannical Democrat rule both here at home and in Washington DC. An avid outdoorsman, amateur golfer, and active member of his church community, Austin spends what free time he has with his mom Sabrina, dad Rick, and brother Troy enjoying the natural beauty of the state his family has called Home since 1908.

Following the disaster that was the year 2020 and 2021, I felt strongly that Arizona and the country I grew up is getting dangerously close to unrecognizable and unlivable. Churches, schools and businesses shut down by elected officials is unforgivable and we need a state legislature that will hold those accountable, at the executive, county and city level for this atrocious act and prevent it from happening again. Washington DC has become a cesspool of uni-party rule. As a conservative who believes strongly in the 10th Amendment the States are the only remedy to save our Republican form of government. Our culture has been eroded by Marxism in every aspect of our lives, and so called “conservatives” who have refused to play offense have allowed the left to run rough shot over children, private businesses, sports, academics, and more. We need Arizonans who understand how high the stakes are this far in the game. I’ve gone toe to toe with the radical left for several years on college campuses and off, I understand what it will take to win and save my generations chance at the American Dream. My generation has been saddled with crippling debt, historic inflation, rising housing costs, and a society that has told them it’s ok to not have children, that the government must be the only ruler in your life and that the unborn are are unworthy of protection. I refuse to allow this cancerous culture ruin my country. We need conservative warriors in every level of government, but I believe at the state level is the most crucial in this part of our history. We need conservatives who are relentless and uncompromising in defense of the Bill of Rights and unborn. I believe we need legislators who will work with the next Attorney General to challenge the murderous “right” to an abortion. I believe we need legislators who will be adamant in protecting Arizona’s water for rural communities. I believe we need legislators who will vigorously defend parents and students from overbearing unions and leftist dogma. I believe we need legislators who are unwilling to allow churches and private businesses to be chastised and “canceled” by popular culture. I believe that if my generation doesn’t step up now to take ownership of Arizona and America that there won’t be an America in the next decade.