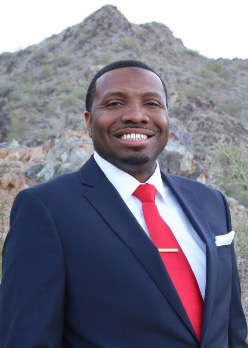 Christian’s life began at Henry Ford hospital in Detroit, MI. He was raised by his father and mother, as their only son, the youngest of 3 children. Christian’s journey to Maricopa County Phoenix, Arizona began in 2002. His passion is Faith in God; the Constitution of the United States and as an IT (Information Technology) certified expert, blessed in his field 21 years. It was a blessing for Christian to begin his IT career in high school by volunteering at his home church serving the Lord by establishing a web streaming media presence, developing individual websites for the church’s auxiliaries, and supporting 200 church employees.

I got involved in politics after witnessing how much President Donald J Trump included God in his political activities before he got elected, at Trump rallies, in the MAGA agenda, at the White House and while Trump implemented his policies. I voted for Trump twice, once in 2016 and 2020. I saw how the media attacked Trump in 2015, and God touched my heart leading me into politics. I began to study hundreds of US Supreme court cases, learned that our country has been taken from the People who are the citizens and I got involved by attending the 2018 annual meetings of the Arizona Republican Party and Maricopa County Republicans.

When elected, I will fight to ban dominion voting systems, ban duplicate ballots, require in-person verification for failed ballot signatures, allow Arizona citizens to take video/photos of any election worker, require body cams on all election workers and fight for Voter ID laws. I will protect our 1st amendment, our 2nd amendment, secure our southern border by finishing the wall, fight for Parental rights, protect unborn babies by being 100% pro-life and fight for American Jobs by putting American workers first!