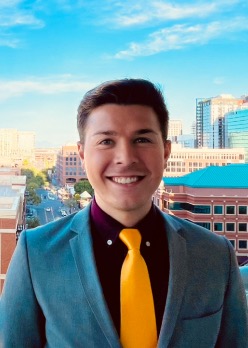 Like many Arizonans, Caden Darrow was born and raised in the midwest where he learned the true value of hard work, family, and the role of our government within our lives. Caden has campaigned with many local, state, and federal politicians broadening his view of how America and Arizona should be governed. Caden spent time working in the United States Senate where his constituent work is highlighted within the congressional record. Caden graduated from Arizona State University with his B.S. in Political Science and an emphasis in criminal justice. As your Representative, he will fight for our schools and ensure campaign promises are fulfilled; unlike they have been. On day one, Caden will move to audit the Arizona Public Education system and find out exactly how your tax dollars are being spent. He will ensure parents once again play a role in their child’s education. Caden believes it’s time we solve the homeless epidemic, strengthen our Southern Border, reduce our state income tax, enforce election integrity, and support our law enforcement. Caden is not a politician and will show up every day ready to fight for Arizonans. Caden is a New Voice, A New Vote!

Today, partisanship is poisoning our political system, and that has to end. Our district’s Democratic elected officials campaign on education every two years, yet they vote against education funding, classroom funding, university funding, and teacher funding, 100% of the time, because the funding bills are introduced by Republicans. Our kids, teachers and schools deserve better than partisan games.

Caden is committed to improving our K-12 schools and universities, boosting our state economy, giving parents more say over their child’s education, stopping the flow of crime and drugs coming over our open Southern border, and supporting our local law enforcement to keep our neighborhoods safe.

The radical leftists who represent our district in the State House oppose all of these common-sense positions, even though most Democrats, Republicans, and Independents support them.

Caden Darrow is running for State House because we all deserve better government than we are getting.

– Audit the Arizona Public Education System.
– Ensure parents play a role in their child’s education and are guaranteed school choice.
– Enforce election integrity and hold elected officials accountable.
– Protect Arizona’s southern border by working with the legislature and our next Governor to stop the flow of drugs, crime, and illegal immigrants from entering our communities.
– Partner with state agencies and local nonprofits to work towards ending the homelessness crisis within our district.
– Further reduce the state’s income tax.
– Support our police, fire, EMS, and border agents.