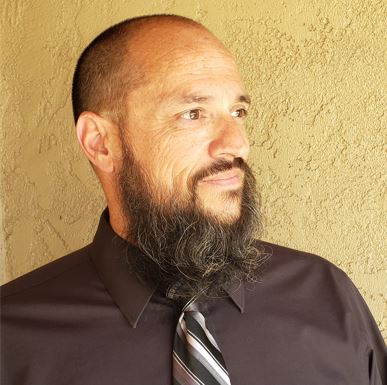 I’m a native Arizonan, born in Phoenix and raised in Globe. I have lived in Arizona almost all of my 47 years, except for the almost 6 years I served as an Airborne Medic in the United States Army. I have been in this district for over 17 years and I have been a single parent for over 8 years to present, my daughter is an adult and out of the school system, but I still have my son as the second child going through Mesa Public Schools and he just started 9th grade at Mesa High. The most important thing you need to know about me is that I am a soldier in God’s Army. I’m a devout Christian, obedient to Christ, and I teach my son accordingly.

At the beginning of my daughter’s freshman year at Mesa High School, I had her read her syllabus to me from each class, this was about 5 years ago. When she read that to me, she chopped up all the words and it sounded as if a much younger child was reading, I was completely shocked. As a result, I had her tested and found out that she only tested that at 7th grade level. That was my fault, I had failed her because I was asleep at the wheel as a parent and assumed the public school system was teaching our children properly and doing their job. I was not paying attention to what was going on at the schools; what they were teaching, how their processes were/are, the indoctrination, the demoralization, and the hyper-sexualization of our children that is happening right before our eyes. At one point I set up a meeting with the school and spoke with all the principals and the English teacher as a result of my daughter testing at only a 7th grade reading level in 9th grade. In this meeting to address this issue, the administration said “don’t worry Mr. Hamlet, most students that come from Taylor Junior High come in at a 5th grade reading level”. My jaw dropped to the floor, I immediately snapped back and asked them why they were trying to normalize that to me as if that wasn’t an issue; nothing to see here, totally normal. The school administration and staff knew there was an issue and acknowledged it, but acted like there was nothing they could do about it or that it is a normal thing. It was at that point I started paying attention and digging into the curriculum and all of the policies and processes at MPS. I tracked the SEL back to the CDC, called out MPS for not informing the parents that the Thrive mental health program was being conducted by National Guard personnel in the students junior high P.E. classes behind the parents backs. I opposed the current revised dress code to the point that MPS had to at least make 1 change to cover the midriff this year, I sniffed out all of the CRT components in the curriculum, I found that the real indoctrination stems from the DOE in collaboration with the CDC and teacher’s unions, I forced Taylor Junior High to remove the mandate of masks and make it optional to return to in-person learning through the mask ban before it was overturned, and so much more. I’ve been fighting this fight for several years. I am a protector, a single father, and God has called me to this place. He has called me to protect our children. I may have failed my daughter, but I refuse to fail my son, or any of the children in our community, and I will fight with my last dying breathe to keep them safe and give them a voice and fight for them to have a proper education.